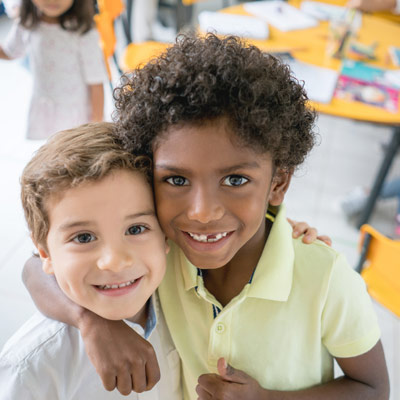 Referred Party Eligibility
In order to receive the discount offered to students/families being referred, they must:

E-Pay/Automatic Billing
In order to receive a referral reward (or any discount), each receiving student/family must be enrolled or agree to enroll in STMLPCC’s automatic and electronic payment program.

Referring Party Reward
Upon confirmation of an eligible and proper referral, STMLPCC will award the referring student/family a discount applied to one (1) month worth of tuition in the amount equal to the monthly tuition being paid by the referred family/student.

Referred Party Reward
Upon being accepted into STMLPCC, and after attending/paying for one (1) month, the party referred to STMLPCC by a current family/student will receive a 10% discount on one (1) month’s tuition.

Unlimited Rewards
There is no limit to the amount of referrals and rewards that a currently enrolled student/family may receive. In the event that multiple referrals are given, received and confirmed in accordance with the above stipulations, the referring family/student will only receive one (1) reward applied to their tuition per month. No more than one (1) reward per one referral will be awarded toward any one (1) month’s tuition.

Combined Discounts
If a referring or referred party is currently receiving any one (1) of the regular tuition discounts offered by STMLPCC, the following limitations will apply:

*Does not apply to Summer